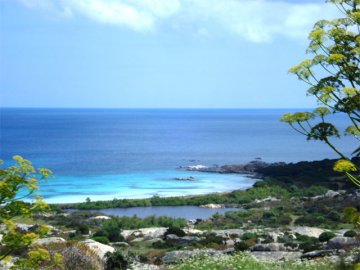 Asinara is an inhabited island in the Mediterranean situated north-west of Sardinia. It’s part of the municipality Porto Torres in the province of Sassari. The island of 52 m² is located off the north-western tip of Sardinia, Punta Falcone. The hilly island has rocky cliffs and pristine beaches and bays. Part of the national parks system of Italy, the island was recently converted to a wildlife and marine preserve. It is home to a population of wild Albino donkeys from which the island takes its name.
Because of its past, and mostly because of the prison located here for the biggest part of the 20th century, the island has been safeguarded from touristic developments. As a result, Asinara is the largest island in the Mediterranean still in a pristine state.