Sant'Antioco, with a surface of 109 square kilometres, is the fourth largest island in Italy after Sicily, Sardinia and Elba. The island is connected to its “mother” Sardinia by both a modern 5-kilometre bridge and a narrow isthmus. The remnants of the old Roman bridge are still visible.
In the 8th century B.C. the Phoenicians founded a new settlement, named Sulcis. Afterwards it was conquered by the Romans and the Byzantines. The current city name derives from St. Antiochus, evangelizer of the area.
We recommend visiting the Palaeo-Christian Basilica of Sant'Antioco, built in the 6th century and renovated in the 11th century, and its catacombs with frescoes; the Forte Sabaudo; the necropolis “Tophet”, a Phoenician sanctuary where habitants laid their infants born dead and those that died right after birth.
The island consists of a hilly landscape and rocky coastline. Is Praneddas and the Arco dei Baci are definitely worth a visit. Ferries depart daily from Calasetta to the neighbouring Isola San Pietro. 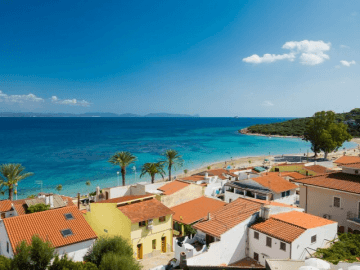