Mountain mines and dream bays: from Buggerru to Cala Domestica

During this hike you will take a journey through the recent history of Sardinia. You will have a walk along paths where farmers had a tough job to do and paths who will lead you to the deep gorges of the hills that will end in the most beautiful bay of southwest Sardinia. For sure a swim here is required! 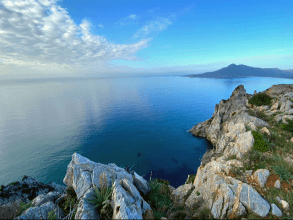 The start of this hike begins in Buggerru. From the steep Via Pranu Sartu you will reach the Via Roma that passes through four steep curves and you will come by Galleria Henry. This is the most spectacular example of an intact mine remained on the island. The trail Sentiero 301 (Cala Domestica) is indicated by red and white markings. After climbing the Buggeru you walk on a plateau full of heather, gorse bushes and mastic, cistus and squire lilies. 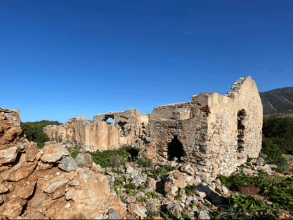 During this beautiful hike you always have sea view and a view of the cliffs of this part of the coast. You pass the remains of the mining village of Pranu Sartu. Once worked and lived here nearly 3000 mine workers who toiled in the mines to search for ore and sphalerite. You still will see the old mine shafts and mining history of this part of Sardinia. 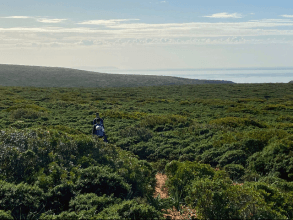 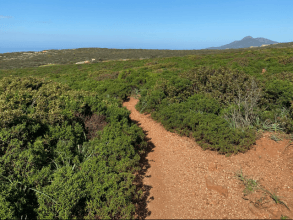 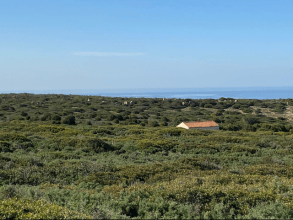 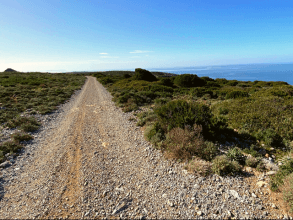 Along the farm over the boulders

Sometimes there are signs missing or the signs are faded and no longer clear. Do not worry and just follow the worn path heading south! At first you will walk on a paved path to a farm that flows over into a unpaved path with rocks and you walk though a field full of rock roses. After climbing the hill you will see the glistening bay of Cala Domestica! 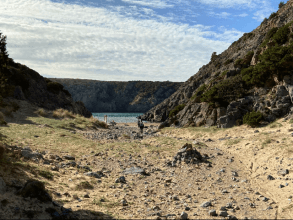 Steep down into the gorge

From a steep descent, the path descends towards Cala Domestica. you walk into a valley with large rosemary bushes and maritime pine (Pinus pinaster) towards the beach. After this descent you will arrive at the amazing blue sea and a dream bay. After a two hour walk you will reach the bay of Cala Domestica. You will be amazed by the beauty of the first bay, but after a short walk through a rock tunnel you will be even more amazed by the beauty of the wide sandy beach of Cala Grande. 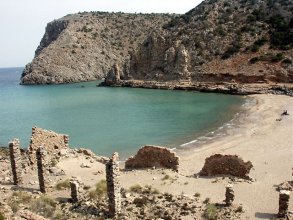 The bay of Cala Domestica is a deep fjord that cuts into the rocky limestone coast. It is one of the few flat coastal entrances between Buggeru and Nebida and was therefore used in the past for the removal of natural resources and charcoal. The remains of old warehouses and the small rock tunnel prove that the bay was used as a natural harbor. The remains of a railway line also testify to this eventful past of the bay. 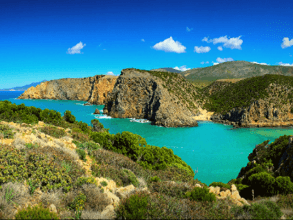 ... even more beautiful when viewed from above

The fjord of Cala Domestica not only looks really spectacular from above: On the south side, a narrow path leads to an old Saracen tower, which lies in the middle of a stone desert that really looks like a moon landscape. Do not miss it! 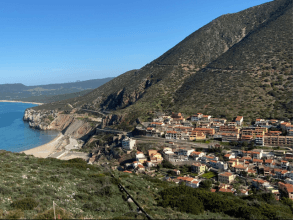 On your way back.

The two-hour outward and return journeys are the same. Just before descending back to the starting point, a look at Buggerru is worthwhile.
The harbor, which is so tranquil today, was the starting point for Italy's first general strike in 1904: workers in the surrounding mines and ore washing plants fought here for the first time on a grand scale against exploitation by overpowering mining companies. Today, only the skeletons of the industrial ruins of lead and zinc mines in the tranquil town remind us that Buggeru was once one of the most important economic centers in Sardinia. The port, from which ores were shipped to the European continent, today is a small marina at the Southwest coast of Sardinia. 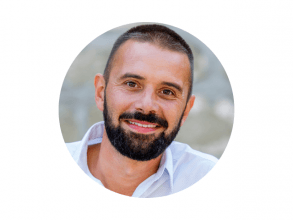 Plan your walking holiday in Sardinia with Sardinia4all!

What is the best accommodation, where is the most beautiful beach, what is the best travel destination on the island for an active holiday? Ask us - we know exactly where to go are in Sardinia!

• Beautiful holiday homes, villas and hotel in Chia
• Active Holidays in Sardinia
• Excursions and adventures: the perfect addition to your holiday