Back in time: Sardinia's fascinating past

Sardinia looks back on an incredibly versatile past. During a journey of discovery across the island you will encounter many traces of different eras and cultures. We've made a short summary of its history, including links to fascinating archaeological sights. 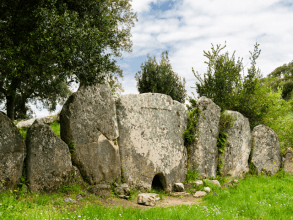 Neolithic to the Iron Age

Sardinia has been inhabited since the Neolithic era (6th century BC). Early on there was agriculture and livestock. The cultures of Su Caroppu, Grotta Verde and Filiestru mostly lived in caves. During the Ozieri culture (about 4000-3200 BC) the number and size of the first villages in the countryside increased. From this time on, mainly images of a mother goddess and murals of a bull have survived. You will often find these in the so-called "Domus de Janas" (fairytale houses) and in rock tombs, which often form a so-called necropolis in groups of 5 to 40 pieces. You can also find some of the founded Menhirs from this time today.

As you travel through Sardinia you will come across numerous towers from the past: the so-called "nuraghe", of which about 7000 have been preserved. The name "nuraghe" has existed since Roman times and comes from the people who founded it: the Nuraghe culture. Most of the specimens have now fallen into ruins, but their imposing remains still remind us of the splendor and power of days gone by. They were built over 3000 years ago in the Bronze Age and served as religious buildings. Research shows that the entrance to the nuraghe always pointed to the southeast. The window openings in the nuraghe were also aligned with astronomical points. The centerpiece is always a so-called "tholos", a self-standing tower with a round interior that is often provided with niches. In later times this tower was often surrounded by side towers and other buildings.

• A visit to Nuraghe Su Nuraxi in Barumini (Medio Campidano)

Due to its strategic location, Sardinia was an important trading base in the Mediterranean from an early age. The island mainly attracted seafarers from the east. Mycenae and Cyprus floated as early as the 14th century BC. trade with the island and the Phoenicians (or Phoenicians), a Semitic people from the Levant, traded all over the Mediterranean. From the 9th century BC the first trading points were established on the island, first in the south and then in the west, so that there could be better trade with the Etruscans.
After the Phoenicians of Carthage took control of the cities of the western Mediterranean in the 6th century BC, they also developed many trading bases and real colonies emerged. The Phoenicians and Punic founded a number of cities in Sardinia: Karalis (present-day Cagliari), Tharros, Bithia, Sulcis and Su Fraigu.

Olbia ("the lucky one") was the only Greek settlement in Sardinia. Its location, on a protected bay with shallow water for fish and shellfish farming, was an ideal place. Ancient writings say that Olbia was founded by the Greeks, headed by the nephew of the famous Heracles. Archaeological sources, however, show that the city was built around 750 BC. was founded by the Phoenicians.
In 630 BC. it was taken over by the Greeks from Ionia (present-day Western Turkey). Olbia was increasingly isolated due to a conflict between Rome and Carthage. The Greeks seized their opportunity and thus established their (only) settlement in the northeast. Then they also established more and more settlements in southern Italy and Sicily, the so-called Magna Graecia. For the Greek Phokaiers of Ionia, Olbia was not only a new colony, but also a strategic base for the establishment of new colonies in Corsica and Southern Gaul and for commercial shipping.
Greek Sardinia disappeared as the influence of the Punicians increased in the 6th century BC.

Archaeological sites in Olbia:
At the highest spot in the city, now home to the Church of San Paolo, in Greek times (and probably even Phoenician times) stood the city's Acropolis, complete with a shrine of Heracles. The traces of the Greeks can be seen in the Museo Archeologico. In addition to the beautiful ceramic pieces and fragments of statuettes from this era, you can also see impressive shipwrecks of the Romans and numerous nuragic finds.

After the first Punic wars, Sardinia and Corsica became a province of Rome and the Carthaginians withdrew. However, it takes a while for Rome to make any actual attempts to claim the island. Because Rome took the reins much more firmly than Carthage, the Sardinian people soon revolted. Although the first Roman triumph was celebrated in 235 BC, the armies and ships had to set sail to calm troubled Sardinia and Corsica again.
The Sardinians tried to avoid Roman influence by retreating to caves and ancient structures in the mountains. When the island in 177 BC. proclaimed a Roman province, the Sardinian hill tribes revolted (in vain).
For a long time it was thought that the interior had completely escaped Roman influence, but recent research shows that only the really hard-to-reach areas have remained free from this influence. So you can find various Roman buildings and finds in the interior. 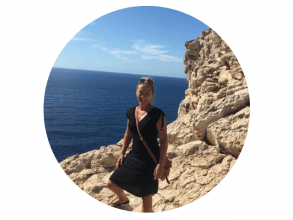 Would you also like to get acquainted with archeology during your holiday in Sardinia? Tell me about your holiday wishes ; I'll be happy to give you personal advice.