Apart from white sandy beaches and emerald waters, there are numerous sights in Sardinia. Read our Top 10 and get ready to explore Sardinia's picturesque villages, beautiful landscapes, spectacular caves and archaeological sights during your vacation. Would you look to book one or more day trips in advance? Discover our unique excursions!
Vrijblijvend reisvoorstel aanvragen

One of Sardinia's absolute highlights is Neptune's Grotto in Alghero, a spectacular cave with stalactites and stalagmites on the tip of the peninsula of Capo Caccia in the Park of Porto Conte. The 204-metre-high cliffs and caves are only accessible via a boat trip of approximately 45 minutes from the port of Alghero. Alternatively, after a scenic route by car, you can descend the 654-step stairway cut into the cliff called “escala del cabirol” (goat’s steps) to visit the grotto.
The lively Catalan town of Alghero is known not only for its caves and its historical city centre, but also for the versatile western coast characterised by turquoise waters, rugged cliffs, hidden bays and sandy beaches. A perfect way to discover this unique coastline is by (sailing) boat, for example with the Andrea Jensen! You can discover the other highlights in and near Alghero here. 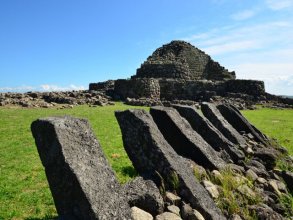 Sardinia is the land of the nuraghe. There are over 7000 remains of the Bronze Age in Sardinia. A nuraghe is an impressive megalithic edifice, developed during the Nuragic Age between 1900 and 730 BC. The sturdy structures consisting of layers of basalt blocks stand only by virtue of the weight of their stones. You can visit a very impressive one in Barumini under supervision of a (English speaking) guide; Nuraghe Su Nuraxi, dating back 3500 years. In 1997 it was listed in the UNESCO World Heritage Sites.
If you're in the area, we also recommend visiting the Giara di Gesturi, a high and steep-sided basaltic plateau. This nature reserve is home to 500 small wild horses. 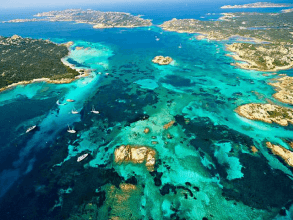 La Maddalena consists of more than 60 islands, of which La Maddalena, Caprera, Santo Stefano, Spargi, Budelli, Santa Maria and Razzoli are the biggest. From these islands only the main island La Maddalena is inhabited. The archipelago was designated a National Park, the Parco Nazionale Arcipelago di La Maddalena, in 1994. A ferry can bring you from Palau to La Maddalena in a mere 20 minutes. After the beaches, the principal tourist sight is the Casa Garibaldi on the island of Caprera, where the Italian hero Giuseppe Garibaldi spent the last 25 years of his life until he died in 1882.
We highly recommend visiting the archipelago by boat to enjoy the beautiful rock formations, nature, sea, bays and beaches. Should you like to visit more islands than just La Maddalena and Caprera, moor in the smallest bays and swim in crystal-clear waters, you could book our excursion with the Lady Luna, which will bring you to the most beautiful spots of this paradise-like archipelago, also known as the European Caribbean. With a bit of luck you can spot dolphins on the way! Alternatively, you could explore Caprera's underwater world during a unique snorkel tour. 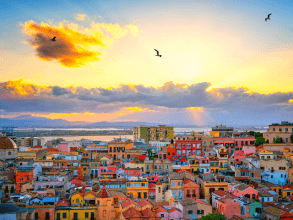 Cagliari | The capital of Sardinia

A must see in Sardinia is of course Cagliari, the island's capital, where you can take a lovely stroll through the narrow alleys and historic quarters, enjoy a tasty meal in a typical "trattoria" and visit the numerous museums and sights. The oldest part of the town, the Castello, accessible via one of 2 gates (the San Pancrazio gate or the Porta dei Leoni) is located against a steep height, surrounded by the old city walls. The San Remy bastion offers a spectacular view across the marina, the beach and the surrounding villages. The “Cittadella dei Musei”, which used to be a repertory of arms, nowadays houses an archaeological museum, the museum of ethnology, a Pinacoteca and the National Museum. The city has a lovely broad sandy beach, called Il Poetto, of approximately 8 kilometres!
Tip: book one of our unique excursions to explore the versatile city by Claudio's Ape Calessino, by Segway or by bike! 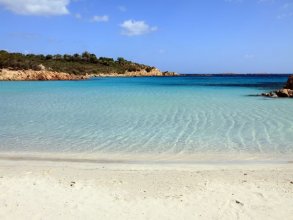 The worldly Porto Cervo constitutes the heart of the Costa Smeralda. Created by Prince Karim Aga Khan IV in the 60s and 70s, this Sardinian seaside resort is popular among both the national and the international jet set. In summer the elite resides in one of the luxurious resorts, villas or hotels or visits the boutiques near the central square. Other seaside resorts on the renowned Costa Smeralda are Poltu Quatu, Porto Rotonde, Cala di Volpe and Liscia di Vacca. Dating back to the 60s, Porto Vecchio (Old Harbour) is located on the south-east side. In summer this harbour fills with mega-yachts and sailing boats. The new harbour, intended for the international shipping traffic, is provided with modern equipment. The quays and embankments are privately owned by Porto Cervo, because of which all allowances for docking and other facilities have to be paid on site.
You can spot both the harbour and Capo Ferro, a 46-meter high cape with lighthouse north of Porto Cervo from far away. The beautiful white sandy beaches of Capriccioli and La Spiaggia di Principe are definitely worth a visit. Tip: read more about the highlights in and near Porto Cervo here. 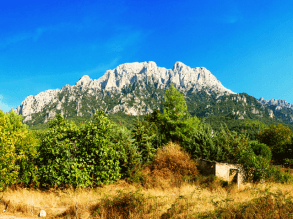 Dorgali, Oliena, Ollolai and Orgosolo are just a few of the traditional villages in the spectacular Gennargentu mountain range in central Sardinia. This beautiful area is a small paradise on earth for hikers. One of the highlights in the wooded area near Oliena is Sardinia's largest well; Su Gologone, an impressive spring where hundreds of litres of pure mineral water come gushing out of a crack in the rock. The spring flows into the Cedrino lake in Dorgali. The beautiful Lannaitu Valley, at a mere 7 kilometres from Su Gologone, is definitely worth a visit as well. This hiking area is dominated by the impressive calcareous massif of Mount Corrasi. From April to October you can book various unique excursions, such as a visit to Tiscali, the caves of Sa Ohe and the nuraghe village of Sa Sedda e Sos Carros.
A must see in central Sardinia is Su Gorropu, Europe's deepest gorge, which you can also visit under supervision of a guide during an exhilarating day trip. Via the Gennargentu mountain range you'll arrive in the lively Cala Golone, a seaside resort south of Orosei, where several boat excursions depart daily to explore the beautiful east coast. This amazing coastline is known for the Bue Marino caves and Cala Luna bay.
Tip: discover the highlights in the province of Nuoro. 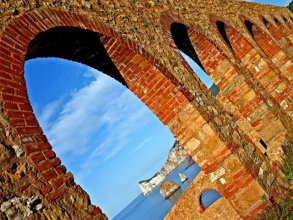 The south-west is a stunning yet fairly unknown area in Sardinia. A scenic route leads via Fluminimaggiore, known for the Su Mannau caves and the Antas Temple, to Buggeru, Nebida and Masua. En route you can enjoy the spectacular cliffs and rocks disappearing into the water. Don’t forget to take a photo (mental or otherwise) of the 133-metre-high calcareous crag “Pan di Zucchero”. In the small neighbouring province of Medio Campidano you can visit one of Europe's highest dunes in Piscinas by following the well-passable dirt road through the forest from Arbus past the ghost town of Ingurtosu. Another highlight is the Scivu beach.
If you're staying in the area, we also recommend visiting the peninsula of Sant'Anticio in south-west Sardinia. With a surface of 109 square kilometres Sant'Antioco is the fourth largest island in Italy after Sicily, Sardinia and Elba. The island is connected to its “mother” Sardinia by both a modern 5-kilometre bridge and a narrow isthmus. The island consists of a hilly landscape and rocky coastline. You can easily cross over to the trachite island Isola San Pietro and its largest village, Carloforte. It was founded in the 18th century by a group of Ligurian coral fishers, who asked the King of Sardinia Charles Emmanuel III for permission to settle on the island, which wasn’t inhabited at that time. After being granted permission they colonized the island in 1739 and they named the town Carloforte (meaning Charles the Strong, but also the Fort of Carlo), in honour of the king.
Over the years the village has transformed into a cosy seaside resort, whose restaurants are renowned for their tuna dishes. For more information about the south-western province of Carbonia - Iglesias, see here. 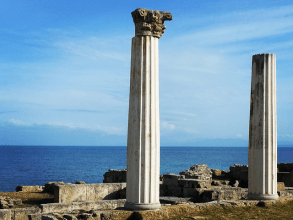 The Sinis peninsula is located north-west of Oristano, in the eponymous Gulf. This pristine area in west Sardinia has not yet been discovered by mass tourism. Cabras is one of the most important fishing villages here, renowned for the production of the Sardinian specialty “bottarga”; pressed and salted mullet roe, served in slices on bread or grated over pastas together with olive oil and garlic. The fish swim back every year to the lagoon, the "stagno" of Cabras, to reproduce. Cabras and Santa Giusta, south of Oristano, are both known because of the crafted wicker boats, called "is fassonis".
Having passed the city of Oristano and the fishing village Cabras, you'll arrive at the archaeological site of Tharros, one of the most important sites in the Mediterranean. The coastal town, founded in 730 BC, was inhabited first by Phoenicians, then by Punics, followed by Romans. Nowadays just a third of the site has been excavated. The southern section consists of the Phoenician and the Roman town, with several baths, houses and sanctuaries.
Another must see is the unique beach of Is Arutas. This extraordinary kilometre-long beach, also known as the 'rice beach', consists of round coloured quartz grains instead of sand and is therefore one of the most unique beaches in Sardinia. Even during the busy summer months this coastal area is relatively quiet. The beach of Mari Ermi is worth a visit as well. 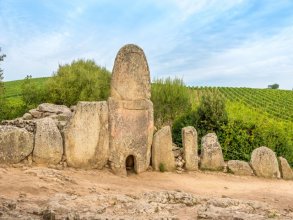 Numerous prehistoric remains are scattered across the entire island, not only the well-known nuraghe, but also many tombes. Each tomb was a megalithic gallery grave, which explains its name; "Tomba dei Giganti" (Giants' tombes). Besides its function as a cemetery it was also used as a temple site where sacrifices were offered. One of the most complete Giants' tombes, Coddu Vecchiu, is located 4 kilometres south of Arzachena, close to the Domus de Janas and nuraghe Albucciu. There are two more interesting archaeological sites in this area, the Tomba dei Giganti di Li Lolghi and Necropoli di Li Muri, which is considered the prime example in the Gallura region.
We recommend combining a visit to Arzachena with a trip to San Pantaleo, a picturesque village dominated by spectacular rock formations. San Pantaleo is characterized by the so-called "stazzi", traditional country houses built of granite blocks, used as a stop over or shelter by shepherds in the past. 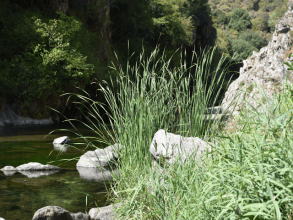 A spontaneous dive in a natural swimming pool in a pristine area? Sardinia4all was happy to test various pools for you!
Is Praneddas, also known as Arco dei Baci, is a beautiful salt water pool on the pensinsula of Sant'Anticio. This extraordinary bath is located at a stone's throw from the sea. Good to know: the spectacular hike via a few cliffs is short but steep, so don't forget to wear your hiking shoes. In the hills of San Teodoro the natural swimming pool Rio Pitrisconi is reached via a exciting climb across the eponymous rivier bed under supervision of a guide: a wonderful trip for all canyoning aficionados! Sa Stiddiosa, just outside of the village of Seulo, is a beautiful fresh water pool in central Sardinia. After an adventurous hike through the forest you'll reach a natural wonder!
(Please note that Sardinia is often dry in the summer months because of the heat. The water levels of the natural pools, springs and water falls may vary.) 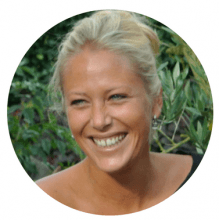 Looking for a unique holiday in Sardinia? Tell me about your holiday wishes, to find you the perfect holiday destination in Sardinia.